Description: Arsenal Stadium Tour – Emirates Football fans will not want to miss this unforgettable Arsenal Stadium Tour! With this in-depth audio tour you’ll be able to go behind the scenes at the Emirates Stadium – home of Arsenal Football Club. Hear from the boss as you take your place in the changing room, then listen to the roar from the crowd as you walk down the tunnel onto the pitch! You can even test your Arsenal knowledge against one of the clubandrsquo;s experts! Go inside Arsandegrave;ne Wengerandrsquo;s office for the first time ever! Want to get a sneak peek into the bossandrsquo;s inner sanctum? The Managerandrsquo;s office has been opened up as part of the Emirates Stadium tour until August 12th 2016 – so youandrsquo;ll need to visit this summer to see it! Donandrsquo;t miss the chance to see what Arsandegrave;ne Wenger keeps in his office (including his infamous PUMA benchcoat) and watch a video of him talking about his matchday routine in this amazing behind-the-scenes experience. Arsenal Stadium Legends Tour On the andlsquo;Legendsandrsquo; Tour youandrsquo;ll be joined by one of the clubandrsquo;s former players, who will guide you around the stadium. Youandrsquo;ll hear stories from their playing days along with their thoughts on the current team. To top off your day youandrsquo;ll also receive a personalised signed photo of your tour guide, plus a limited edition Legends Tour gift. Sure to be an experience you wonandrsquo;t forget! The Arsenal Legends currently taking tours include: Charlie George, 1971 FA Cup hero. Perry Groves, cult hero and 1989 League winner. John Radford, Arsenal centurion and Double winner If you would like to take the Arsenal Stadium Legends Tour please select the Arsenal Legends Tour ticket option when making your booking. Legends Tours run daily at either 11am, 1pm or 2pm (subject to availability). The Arsenal Museum Your ticket also includes entry to the Arsenal Museum, where youandrsquo;ll find a range of exclusive exhibits. These include Michael Thomas’ boots from Anfield ’89, Alan Smith’s shirt from 1994’s European Cup Winners Cup Final, Charlie George’s 1971 FA Cup final shirt, plus much more! Important Information: Arsenal will be regenerating the pitch at the end of the season between the 5th June – 26th June 2017. Tours will run as normal and there will be minimum disruption caused by this. However unfortunately, due to the work taking place pitch side we cannot allow access to the following areas: andmiddot; Pitchside andmiddot; Home Dugout Please Note: Due to an Event at Emirates Stadium, some areas of the tour route will be closed from 22nd May to 4th June 2017. As a result of limited access, there will be no self-guided audio tours available during this time. 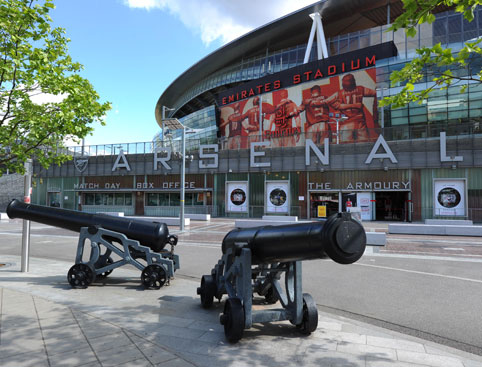 Specifications: Save 20% off the Walk-Up Price up until 31st March 2017! Arsenal Self-Guided Audio Tour Please note thisTour is not available on match days or from 1pm the day before Champions League Fixtures. Whatandrsquo;s Included: Self-guided tour of the Emirates Stadium. Entry to the Arsenal Museum. Ticket Flexibility: Your ticket is only valid for the date you specify when booking. What happens next? Weandrsquo;ll send you an e-ticket via email. Please call the number on your e-ticket at least 48 hours before your tour to confirm your place. You will need to print your ticket off and present it at the Emirates Stadium to take your tour.